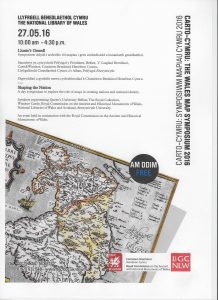 Royal Commission on the Ancient and Historical Monuments of Wales.

Shaping the Nation – the role of maps in both depicting and creating the nation both as an entity on the ground and also as a perception in the minds of people.

Mapping the Marches: Marginal Places and Spaces of Cartographic Innovation

Humphrey Llwyd and the map of Wales

Maps and mapping at the Royal Commission; putting the past in its place